The Plastruder Jack isn't working exaclty as I planned.  It works good for a while, but the filament eventually stops moving, then if you tighten the Plastruder Jack, it causes the drive gear to strip the plastic, filling the gear teeth with plastic and spinning the gear, much like a tire stuck in the mud.  I also think the wheel may be slipping to the side of the filament, removing the pressure against the filament.

Since I've been having weird extrusion problems (high temp required, extrusion curls near the nozzle instead of dropping straight), I thought maybe I had burnt plastic clogging up the nozzle and heating chamber.  This might also explain why the filament stops moving, it might be bottoming out inside the heat chamber.  I happened to have enough parts to build a new hot end, so I swapped out the new hot end for the old one.  I heated it up and did some tests. It worked great for a while, extruding a very smooth noodle that coiled up on the build platform a few inches below.  Then for some reason, it started to kink a little bit as it left the nozzle.  Maybe the new nozzle is clogged as well.

So, in summary, my filament drive doesn't work right and the hot end still extrudes funny.

I took apart the filament drive section again to see what other modifications I can do.  I have two spare idle wheels made of acrylic, so I'm going to put both on the bearing, doubling the width of the idler wheel.  This should keep the wheel from slipping to the side of the filament.  To make room for a wider wheel, I filed the points off of two of the plastruder parts as seen below. 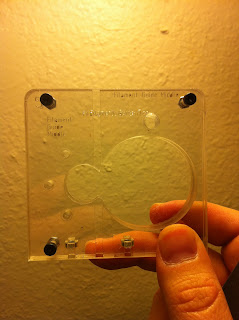 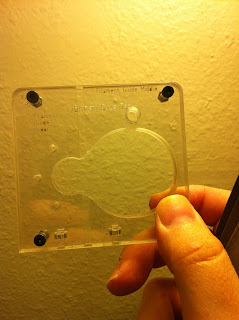 I'm not sure if this is enough clearance for the double idler wheel.  Will work on it more tonight.
Posted by Unknown at 2:25 PM