My entry for the Show Us Your Dudley & Bob Contest

I built a sign to advertise the Dudley and Bob Show on Austin's 93.7 KLBJ FM and mounted it in the bed of my truck.  I drove it all over central Texas for more than 800 miles and parked it near major roadways for 31 hours exposing it to approximately 98,937 vehicles.

The sign was in my truck for 21 days so it was with me everywhere I went.  One of the more creative things I did was to drive the sign to each of the contest sponsors (with a physical address) and take a picture of our signs together.  I covered a lot of ground by simply going from sponsor to sponsor.  This also tied the sponsors into my advertising campaign. I posted pictures of each sponsor to facebook and twitter in real time during my travels.  This was more about logging everything as I did it and less about advertising through social media, although I did get a lot of attention from intrigued friends.

I used the Speed Tracker iphone app to track my routes.  Screen shots for each day are below.  They show distance, travel time, stopped time and total elapsed time. I'm also including a map screen shot of each route.

All of my traffic data is sourced from the 2010 District Traffic Map, Austin Base Sheets, sections 4, 8 and 9 from this link. http://ftp.dot.state.tx.us/pub/txdot-info/tpp/traffic_counts/2010/aus_base.pdf

In cases below where I parked the sign, I calculated the traffic per hour using the 24 hour averages.  For the moving traffic rates, I averaged all of the counts along the route from beginning to end.  I divided that average by 24 hours to get the average per hour for anywhere on the route. Then I multiplied that by Travel Time from the Speed Tracker app.  I did not account for every hour parked in a public parking lot.


This was quite an adventure and I had a lot of fun promoting the show.  Thank you to Dudley & Bob, KLBJ FM and the contest sponsors for the opportunity to promote a show I love and the possibility to win some money while doing it. 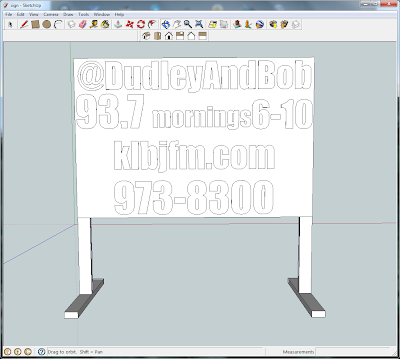 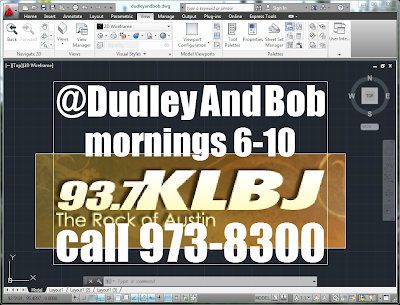 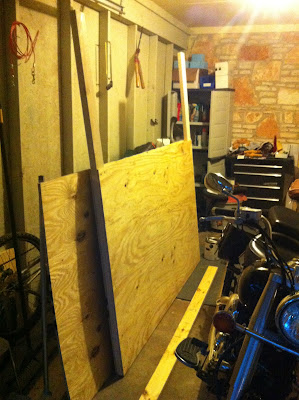 Thursday 5/17 - Finished building the sign and went on a test drive.  Later that night, I painted the sign yellow. 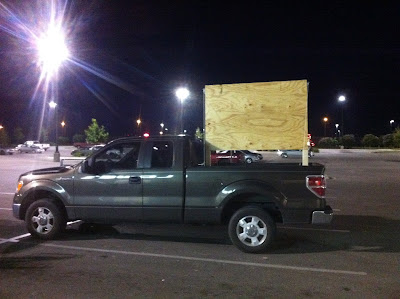 Friday 5/18 PM through Sunday 5/20 AM - Painted the letters and logo.  This was the most difficult part of the entire thing.  I wanted it to look good and be readable from long distances.  I traced everything onto the sign, but it was very difficult to paint and stay between the lines.  I ended up taping all the letter edges on one side of the sign and used my paper templates where I could on the other side to make it easier to paint. 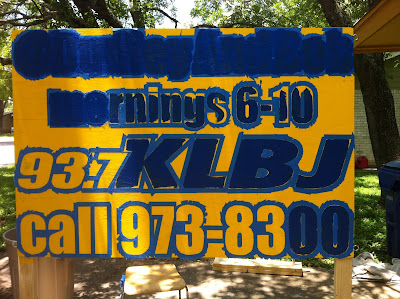 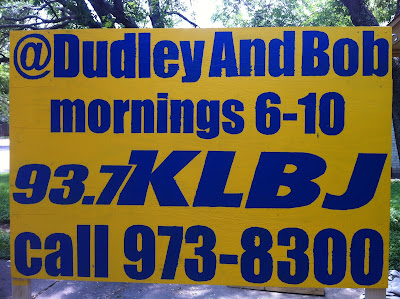 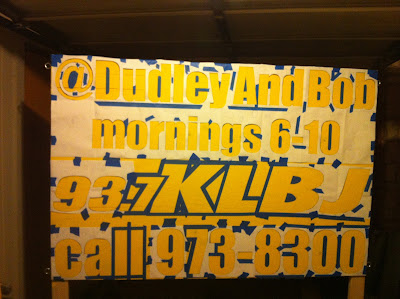 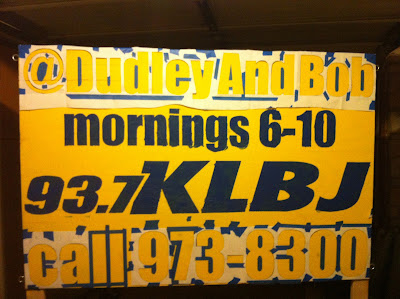 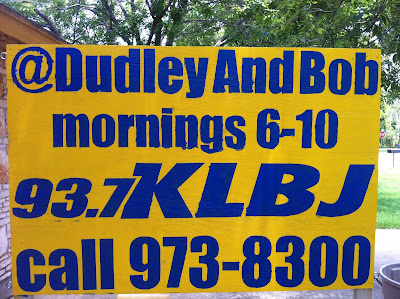 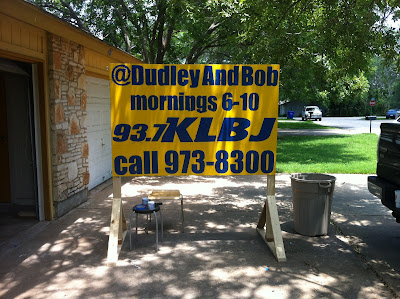 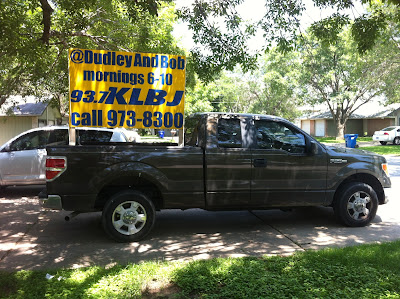 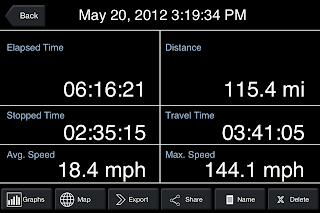 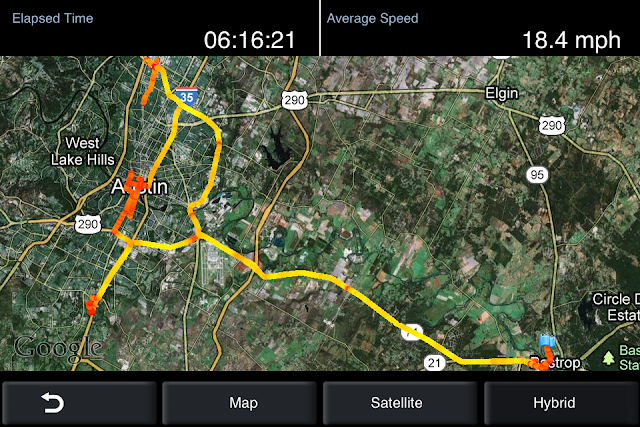 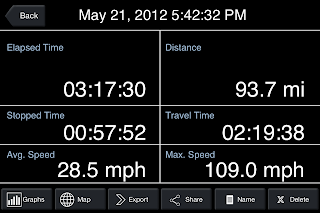 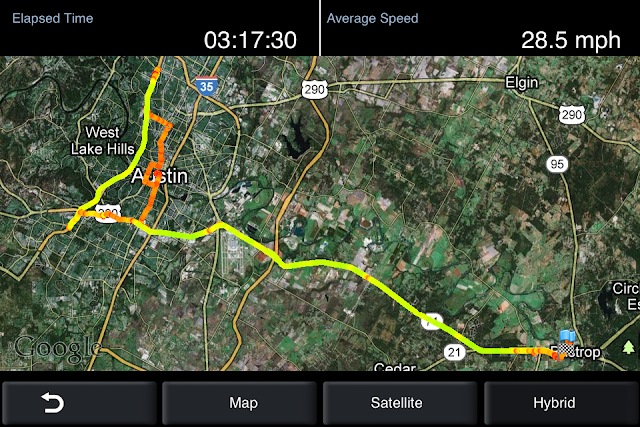 According to TXDOT (section 9), this part of highway 95 sees an average of 13,100 people per day.  The sign was parked there for 8 hours, so approximately 4366 people drove by the sign that day.

During the Darkives 50th episode recording, CJ and Chuy invited me onto the show for a bit and in doing so, CJ mentioned to the crowd (and the future podcast listeners) that I was "the guy driving the giant Dudley and Bob KLBJ truck". http://darkives.com/2012/05/25/cgjrpc50/ 20:45 - 21:02 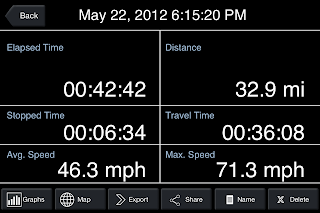 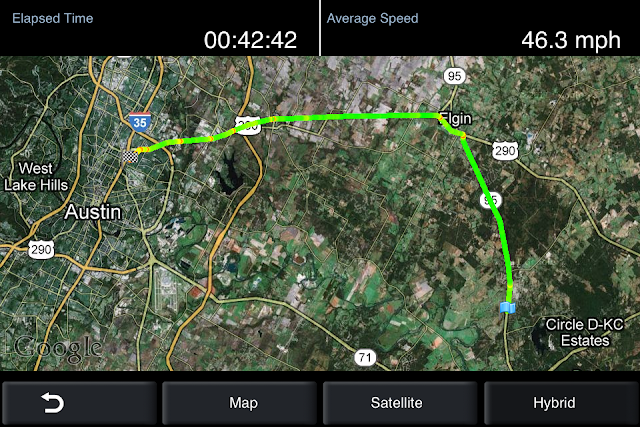 Sunday 5/27 - Amy's Day!  I decided to visit as many Amy's Ice Creams locations as I could in one day.  I stopped at 7 Amy's locations and had ice cream at the first 6.  They gave me a free bottle of water at the 7th location.  I also drove by the Amy's on west 6th near lamar 3 times but could not get a good parking space.  At each location, I explained to the employees what I was doing and they all replied with encouragement but I also got some weird looks. 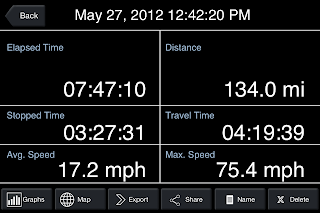 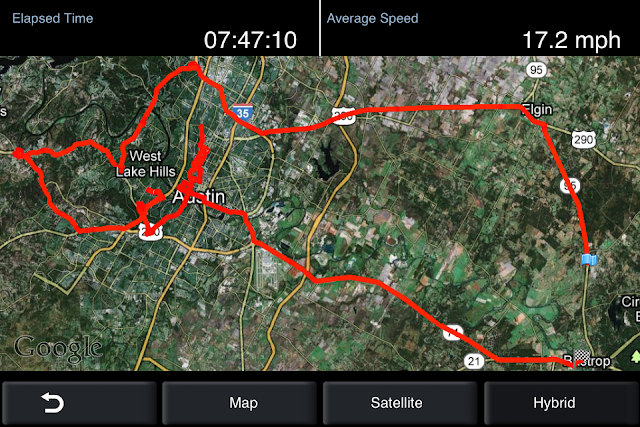 Amy's Locations:
Monday 5/28 - Brodie Ln and South Lamar. I toured some of the shopping malls on Brodie Ln then headed to the Alamo Drafthouse on South Lamar for a movie.  I parked the sign so it was readable from the Alamo Drafthouse entrance as well as the Highball entrance.  I drove 42.4 miles during the daylight. The hourly traffic average for this route was 2927 vehicles x 1hr 30min = 4,459 vehicles 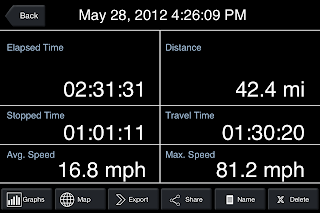 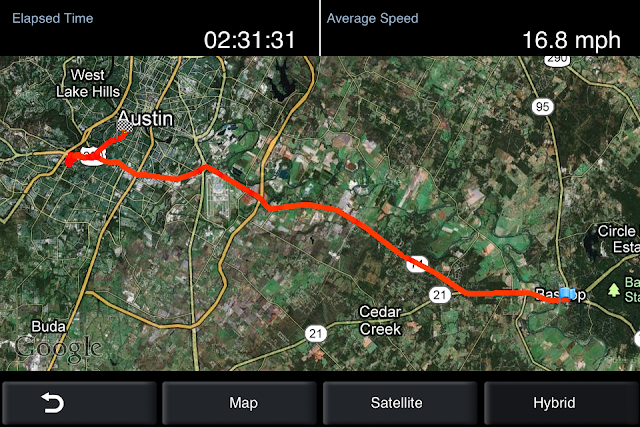 Friday 6/1 - Oak Hill and Beyond.  I drove from Bastrop through Oakhill and about half way to Dripping Springs in the evening.  I didn't post anything on twitter or facebook this day.  76.7 miles total.  The hourly average for this route is 4866 vehicles, multiply by 1hr 41 min and you get 8192 vehicles to which my sign was exposed. 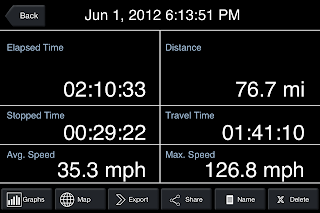 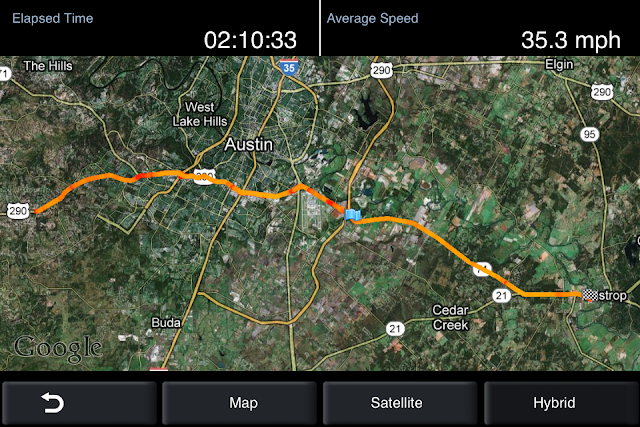 Saturday 6/2 - Another day on the road.  I thought of visiting competing radio station remotes, so I looked online for upcoming events.  All of the clear channel stations listed a kickball tournament at Kreig field, so that was my first destination.  Next I drove up and down 6th and 5th streets.  After that I headed to the Hancock shopping center on I35 @ 41st.  I ate lunch there and drove around the parking lot a few times.  A father and son approached me and asked if I was Dudley or Bob and if the station was putting on a party. Later, one of my friends stopped by for a visit after seeing my facebook post.  As I was leaving, I got a few honks and thumbs ups from people.

Next I drove by the casting call for the Machete sequel at Austin Studios.  The sign got a lot of attention as I pulled in.  After that I headed north and drove though the IKEA parking lot on my way to Hardtails.  I took a quick photo at Hardtails then headed to a friend's house in round rock for quick visit.  Next I got on 183 and drove south to I35.  I went north and stopped at Spinners near Wells Branch.  After that I went west on Parmer and stopped at Fry's. Then I took Parmer east to 290 before sunset. 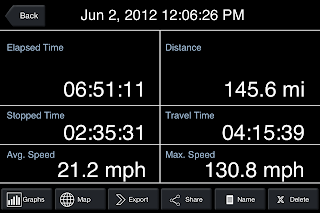 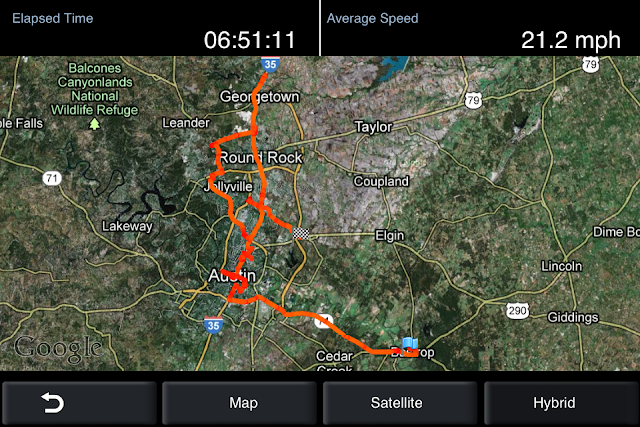 Wednesday 6/6 - Briefly Parked on highway 95 from 8:00 - 10:00.  One of my coworkers noticed some city workers investigating my truck, so I moved it off the highway.  My employer owns the land and I had their permission to park there, but I did not want my truck to be towed. 2 hours = 1091 vehicles.

Saturday 6/9 - Another Austin trip.  This time I ran some errands with a friend.  We stopped at Leif Johnson Ford and Barton Creek Mall. After that, we split up and I circled the mall a few times then drove though the Brodie Ln and Westgate shopping areas.  Then I took a long route to Decker Ln so I could drive by the ROT Rally a few times.  I drove through Manor and Elgin on my way to Bastrop.  I drove 156.8 miles.   The hourly traffic average for this route was 3215 vehicles x 4hr 29min = 14,413 vehicles 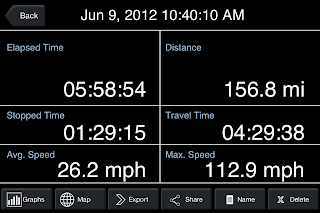 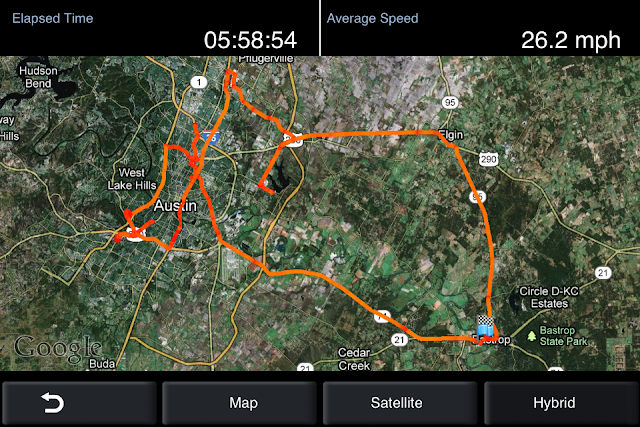 That's all folks! (video is in process)
Posted by Unknown at 3:34 AM